The selection of professional fonts for any project 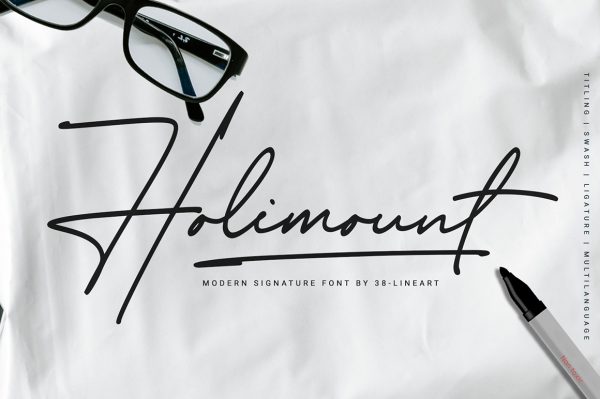 We did simple research on the signature font and we found several important notes that are often seen in a signature.

The first thing is that initial letters are usually uppercase letters that have full power as an attraction, shape and size are very prominent, usually very large so that the limit of ascender and descender is very long.

The third thing, some signatures begin and end with a long, firm horizontal line, so we complement this font with alternate titling and swash.

The fourth thing is “conical”, the appearance of the whole text usually starts large at the beginning to shrink at the end of the word, sometimes there is an emphasis at the end.

The fifth thing is that some letter combinations differ from the basic references, so ligature is something that is mandatory in the signature font.

The sixth thing, some signatures are sprinkled with lines under the text, so this font is equipped with 26 swashes.

It is the combination of these six concepts that we frame in Holimount. A masculine signature font, elegant and full of mystery that invites people to want to know more about the brand that you created with this font.

The quick brown fox jumps over the lazy dog

There are no reviews yet.

Be the first to review “Holimount” Cancel reply